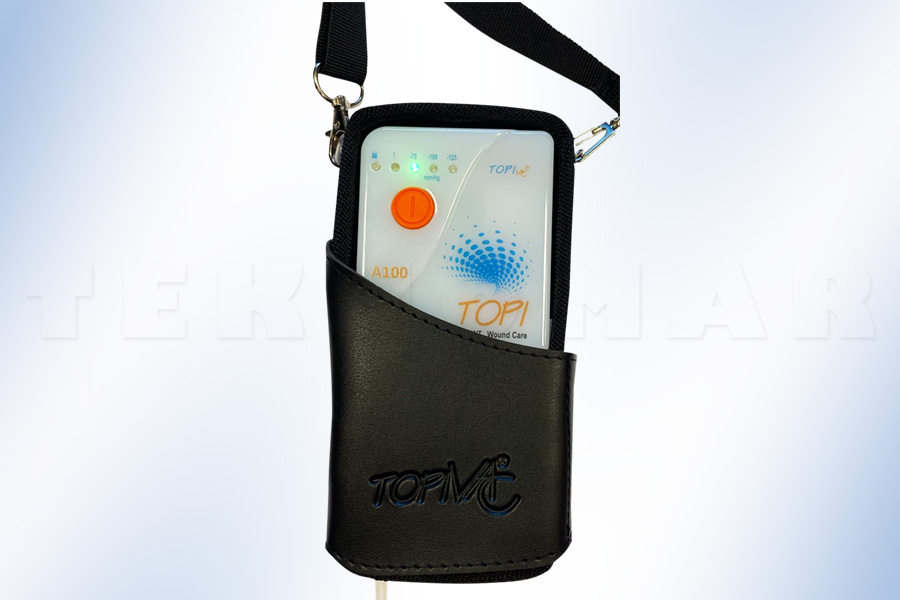 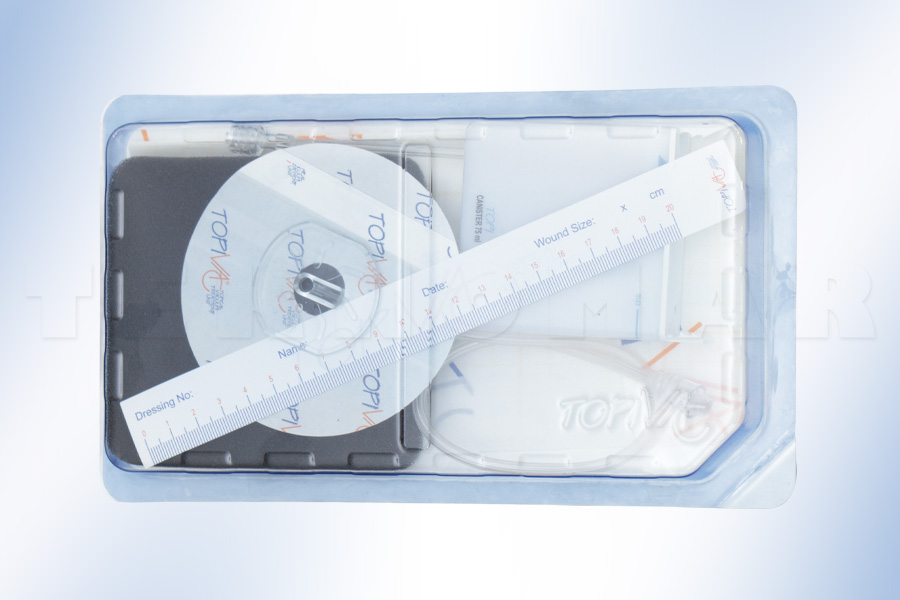 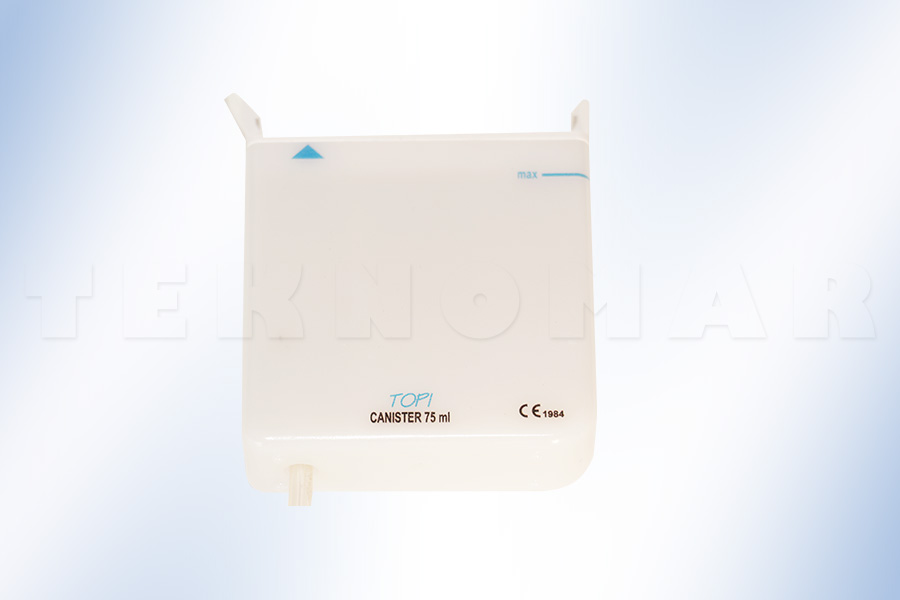 Including Topi A100 Therapy Device

● Increases the life quality of the patient and decreases the treatment costs.

● Provides ease of use without expert help.

● You continue your social life uninterruptedly, without anyone noticing.

Which treatment is it used for?

● It is used for the rapid healing of the wound in wound treatments such as Diabetic Foot Wounds, Bedsore, Chronic Wound, Non-Healing Wound, Burn Injury, Infectious Wounds, etc.

● It pulls exudate from the wound centre. It increases granulation. It fastens wound healings.

● It is used in wounds with low exudate.

● It has high healing efficiency by providing granulation in the wound.

● It provides ease of use without expert help.

● Thanks to its specification and efficiency, it is more efficient, economical, and productive than other wound care products used in the market.

Small dressing sets are designed for patients whose wound sizes are smaller than 100 cm2. If required, it is also used for wounds whose sizes are up to 200 cm2 by using a double dressing set.

It provides ease of use without expert help.

If the person's wound is in the area that he/she can reach, he/she can apply his/her own dressing. In this case, an expert help may not be required.

Consult your physician before use.

Followings are included in the 5-Piece Dressing Set Box:

You can also dispose of your device after the treatment protocol is over.
Each new set that you will buy has also a device.

Negative pressure in wound healing is a proven, non-invasive wound treatment method. This healing device is needed for applying a controlled negative pressure (sub-atmospheric) to a wounded area.

It continuously draws exudate (wound fluid) from the wound via a special foam dressing set (TopiVac MultiDRESS) applied to the wounded area specially produced for the device, it provides equal distribution of negative pressure to the wounded area. It heals the wound by forming granulation.

The device and dressing set operates in harmony and integration with each other.

Our dressing sets have CE certifications and all kinds of biocompatibility test certificates.

TopiVac/MultiDRESS classic vacuum-assisted wound therapy system is a wound closure dressing set operating under vacuum with a foam. It is a state-of-the-art product that improves the quality of life of the patient and increases the success of the treatment of the physician.

Sets cannot be used alone in wound treatment without the NPWT device, they do not work alone, but are used in vacuum wound treatment if used together with related devices.

Topical vacuum treatment sets help to remove infection and waste materials (exudate) from the wound, to heal the wounds in a shorter time, to form granulation, and to provide a wound control safely, together with the controlled negative pressure created by Topi A100 Mobile Disposable CLASSIC NPWT active Vacuum-Assisted Wound Care Treatment Device.


Application of the Foam to the Wound

● While a dressing is applied, the area to which the drape is stuck should be oil-free and clean. For this, the area should be wiped with alcohol or tincture of benzoin before the dressing so that the drape does not leak any vacuum and will stick properly. The wound edges should be cleaned.

● Put on your sterile gloves to avoid infecting the wound centre.

● Clean the wound centre in line with the advice of your physician and with the method determined.

● After cleaning the wound centre, wipe the 5-6 cm2 area of healthy skin tissue around the wound centre from oil, blood, dirt, etc. with tincture of benzoin or similar cleanser.

● For your dressing to be successful, be sure to clean the surface of the skin where the drape will adhere before dressing. The drapes to be adhered to the clean skin surface adhere more smoothly and firmly. They may occur problems for adhering the drapes to oily and dirty skin, vacuum leakage may occur.


● Measure the size of your wound centre by means of the ruler included in the sterile dressing set.

● Stick the drape inside the sterile dressing set onto the clean skin tissue and the foam that is centered on the wound centre in a way that there is no vacuum leakage.

● Remove the protective film on the drape.

● Make a 1 cm2 hole by cutting the drapes over the foam with sterile scissors in a way to center the foam placed on the wound centre.


● You can find an exudate suction set with a suction cup and trackpad inside the sterile dressing set.

● Place the suction cup at the end of the exudate set by centering it on the 1 cm 2 hole that you made on the drape.

● Holding the trackpad (circular drape) with both hands, open the film tape on the part to be adhered to.


● Remove the film layer on the trackpad.

● To avoid vacuum leakage, make sure that the trackpad and the drape stuck to the skin stick well by rubbing them with your hand.

● In this dressing method, there should be no vacuum leakage. If there is a vacuum leakage in the dressing, it becomes difficult to get the desired result in the treatment.


Changing Of The Dressing Set

● If the foam dressing set is worn out, if it remained on the wound for more than 2-3 days, if the adhesive feature of the drape has disappeared, if the vacuum is not be applied, if the hose is blocked, change the dressing set.


Inserting The Canister In The Device

● While removing the canister, pull the long lug out so that the canister comes out of its nest.


Changing Of A Full Canister

● Exudate from the wound is sucked into the canister by the vacuum effect. The canister has a gel that solidifies the liquid.

● The exudate taken into the canister is solidified with gel.

● The disposable mobile Topi device gives a warning when the canister is full and stops the vacuum function.

● A full canister cannot be used in the device.

● In this case, change the full canister with a new one to continue the dressing.


Connecting The Canister And Device Component With The Dressing Set

● There are connecting hoses on the canister and the dressing set. The dressing hose has a female vein valve.

● Canister connecting hose has a male luer lock. Both luer locks are connected to each other by half a turn.


● Our product is designed to help you, our valued users, to be applied wound treatments and regain your health while maintaining your own normal lives without decreasing your standard of living.

● You can fasten the device to the closest place where your dressing is located with the device carry bag limb apparatus.

● If the dressing and device are at a long distance, you can use the extension hose.

● In this way, you can hang the carry bag of your device on your shoulder.

● We recommend you use 3A batteries in your device.

● It is the longest battery-efficient device in the world.

● Topi device is used until the battery power level drops to 15%.

● Your battery may run out due to vacuum leakage and continuous operation performance.

● Before the battery runs out, your device gives a battery warning.

● It maintains its effectiveness for at least 30-60 min. depending on the working performance.

● In this case, replace the device battery with a new one.

● Operating Life: Operating life of the vacuum pump is 1000 hours.

● It is capable of including 5 dressing sterile products and disposable Topi NPWT wound care device.

● It is sold externally.

TopiVac-Amedus; does not perform medical practice, provide medical services or advice. The information on this web site should not be construed as medical advice.

Our Training and Promotion Videos
‹ › x 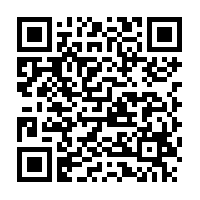